August Update: What I've Been Working On 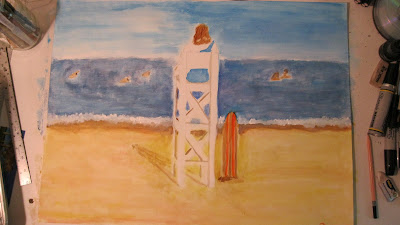 I recently finished a commissioned watercolor painting for an online client. He described the desired piece as a depiction of Jesus Christ on as a life guard sitting on top of his watch chair with a family playing in a distant ocean. There was also a request for there to be a surf board in the painting. I began working on this project using photo references that the client provided. By the end of the first week I presented 2 sample 9"X12" water color paintings for the client's consideration. The client used Photoshop to restructure one of the sample paintings and sent it back to me as a file attachment. Using the client's digital revision, I was able to create the 18"X 24" poster sized final.

Another commissioned art illustration I had finished earlier was of a sheriff.

I had drawn several different versions of this character and before the client and I had reached the desired result.

I am still drawing caricatures at parties and events. I have advertisements published in Golfer's Digest and Parents Press. I also continue to advertise on Craigslist, and once a week I draw a caricature just to keep my skills sharp. 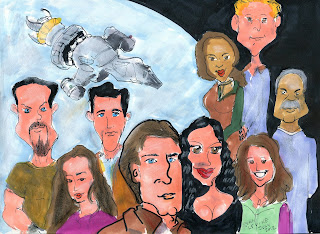 This recent sketch depicts the crew of Serenity; a spaceship in a discontinued science fiction television show called Firefly. I had watched all 5 DVDs from Netflix and was very impressed with the character development and story telling of this show. It could be compared to Friends, only it's in space and people are constantly trying to kill them. It's very exciting entertainment. I can't really decide which character I like the most. They are all very dynamic people.
I also finished some landscape paintings. 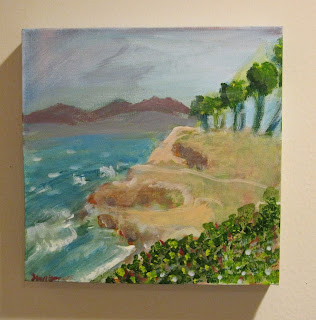 I also finished a portrait of my friends dogs: 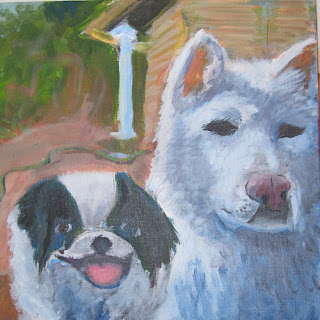 And here is another one I finished of a cat: 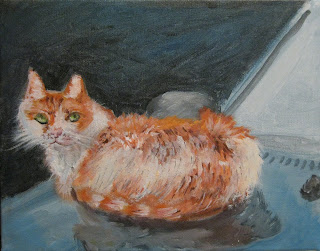 Last week I enrolled in a painting class. Now I am getting individual instruction from a far more experienced painter in a studio space with other artists on a weekly basis. I am hoping to strengthen my ability to add realism in my work. Realism takes an acute attention to details, and being a cartoonist I have always captured the essence of my subject matter with exaggeration; using caricature. It's important to challenge myself and to always be learning new things to promote brain growth, increase the range of styles I can work in; offering more to clients, and adding value to each work I produce.

I also continue to work on the comic book collaboration "Who Is It?..Doomsday!"with Los Angles writer David Moses. This graphic novel is about a madman named Countdown who goes on a killing spree of vengeance after witnessing a team of medical professionals denying the one thing his father needed to live. Here is a recent sample of my progress on the comic book: 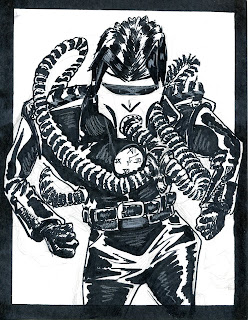 Countdown's hoses have mechanical locks that connect to a pump in his chest. Each hose has spring loaded talons that hook deep into his victims before the pump starts sucking it's blood out. Countdown possesses a unique ability to metabolically breakdown the compounds of blood and convert it to energy faster than the pump intakes it. His power can regenerate wounds in seconds. He is virtually indestructible! I started working on this project in 2010. I still have about a third of the story to illustrate, but I am hoping to get it finished and published for sale online by the end of 2012.


Posted by stanimation productions at 1:20 PM No comments: