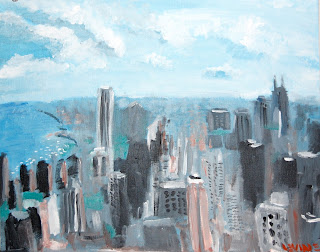 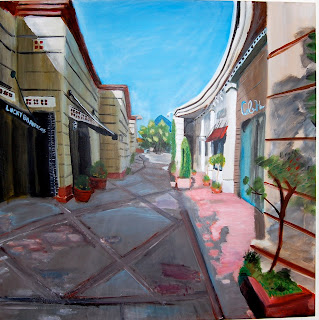 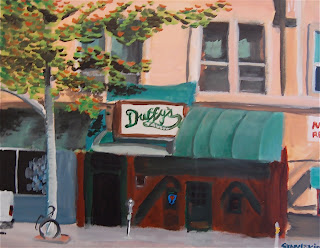 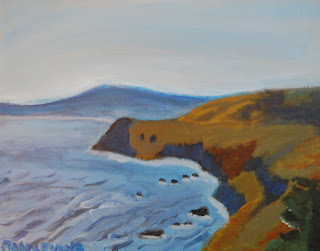 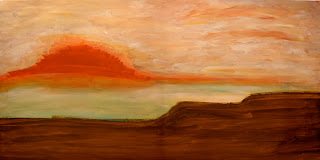 A Bench Portrait By The Grand Canyon

18" X 14"
acrylic on canvas
unframed
Posted by stanimation productions at 3:04 AM 1 comment: 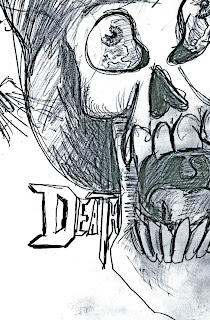 This one is called "Death's Skull." I drew it with a number two pencil in a short time of less than 10 minutes. This kind of sketch would be great to promote your heavy metal band, or maybe it would make a cool tattoo. It could even me modified to make a decent political cartoon. 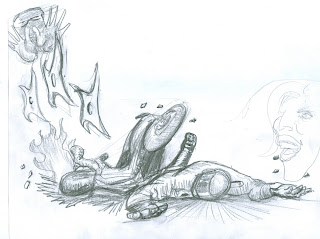 This one is called "biker Crash." I drew it with a number two pencil. A few years ago I used to ride a motorcycle, and I've been through a few accidents but luckily nothing serious. Although, I will never be able to straighten my left arm due to a injury to my elbow. This kind of sketch would be great for your graphic novel, or comic book. It's got a ninja throwing those those throwing stars at the motorcyclist. Ninjas vs bikers sounds exciting, and action packed. Keep tuned in to what I do with this, because I'm definitely going to do something with it at some point. 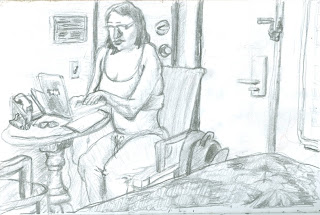 My wife and I took a family trip to Disneyland. Our son had never seen Disneyland before, and he was looking forward to this trip for a long time. One thing I hate about Disneyland is the crowds. Being surrounded by a throng of people I don't know gives me anxiety because they sometimes trample you down, or infect you with swine flew (the H1N1 virus) causing bodily injury. This is an graphite illustration I made of my wife and I in the hotel room. She is a writer, and I (as you can see) am an artist. We needed a break from the crowds, and just sitting there for 4 to 6 hours during the hottest part of the afternoon drawing this hotel room scene really helped me relax. 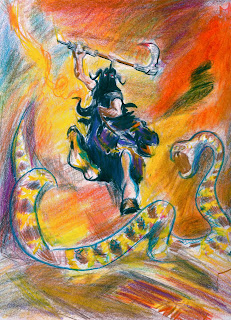 This is my study of Frank Frazetta's "Death Dealer VI." I made light circular motions with color pencils on white paper to achieve the painterly effects. This style of illustration is create for comic books, storyboards, or anything involving an action scene. The use of vibrant colors really works to achieve the effect that something is interesting is happening. The elements in the illustration come to life, and pop right out of the page! 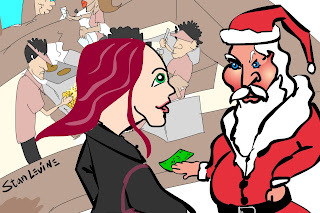 This is an illustration I made using Flash Professional 8 that was published on Ronda Levine's blog where she wrote a story about how Santa Clause bought a woman a "Cheezeborger," somewhere in Michigan. This style of illustration is great for adding original looking graphics to your website. It might also work for a children's book. 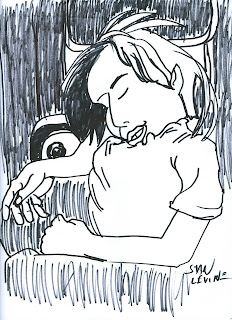 This is a Sharpie pen drawing of my son sleeping on the airplane on the way to New Orleans. This style of illustration might work perfectly in your magazine. What do you think? Don't be shy :) I haven't had that many publications, so if you need an illustration that will be published in your magazine I might not even charge or if I do very little...Like $5 or whatever you can afford. 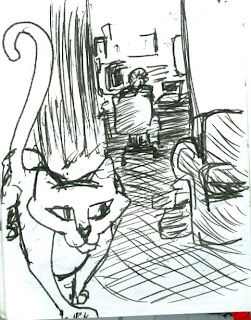 I drew this one in here in my little sketch book I take with me wherever I go with a little black ink pen. 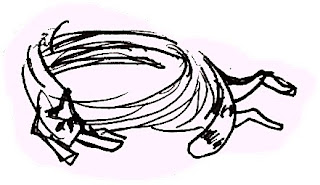 I live with 2 cats. This is what Stripes, the orange tabby cat does. He chases his tail. It's so funny! This style of illustration is create for your comic strip, so if you have an idea for one let me know. I like to collaborate with other people out there as long as they are serious, hard working and dedicated to whatever creative project they need my help working on. 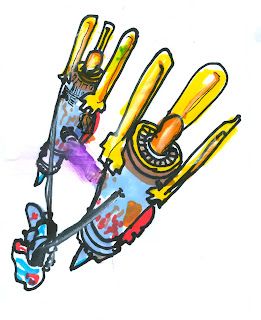 This is my study of Anikin Skywalker's podracer from Star Wars Episode I. I used a reference to accurately copy this illustration using pen and inks from "Star Wars Episode I Incredible Cross-Sections." This illustration demonstrates that my drawing skills are adaptable to any style. If you're a job recruiter from Lucas Arts or ILM, looking for a sketch artist to storyboard or come up with some concept drawings for the next Star Wars movie look no further! I am the man for the job. 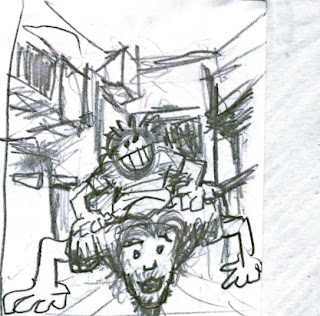 I am a very prolific artist, meaning that I draw at least one sketch a day. I did this one on a little piece of scratch paper at the kitchen table one afternoon. Another great example of my cartoony sketchy style I like to use to show humorous situations. 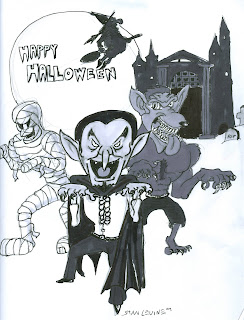 This illustration style would be great for animation or a kids coloring book. It's pen an inks on white paper. 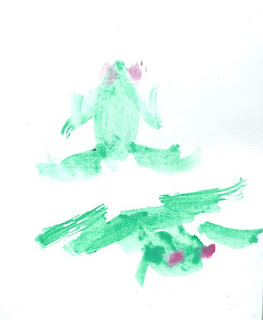 A little water color painting of some frogs I made in my little sketch book. 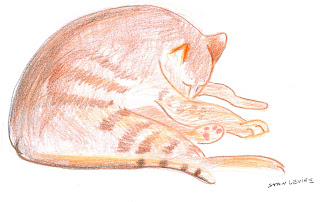 This is Mr. Stripes doing what he does best...He's an orange tabby cat, part Siamese. I drew this one with color pencils on white paper.

Well...That's all for now. I got to get back to work!
Posted by stanimation productions at 1:10 AM No comments: 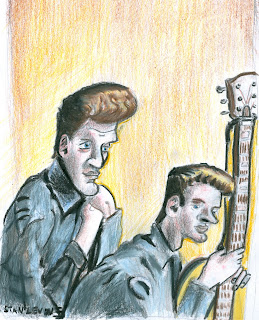 This is a caricature I, Stan Levine did of the Everly Brothers. I do illustrations for comic books, magazines, or even party events for very affordable prices. If you are an employer for a magazine or book, and are looking to hire an illustrator, I will actually do one illustration for FREE, as long as my work is going to be published either in a magazine, book or website. I value the exposure people out there give me of putting my work out there for people to see. Party Events are a hassle. I enjoy working in the comfort of my home, but for party events I sometimes have to drive an hour a way. For that reason I charge $50/hr to do caricatures for party events plus a $50 travel fee if I half to travel half an hour out of my way. If you're someone who would really like to have a custom portrait or caricature of yourself, or a friend, but don't have all that much money to spend, you can e-mail me a jpg file. Then I can just use that to draw your portrait for the bargain price of just $10. You can use your credit card on Paypal, where I will instantly be able to receive your payment.
Posted by stanimation productions at 12:49 AM No comments:

The Adventures of Froggie 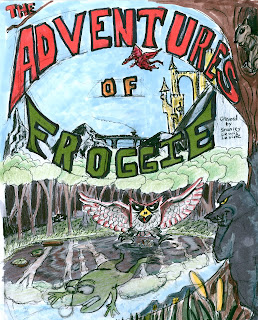 The Adventures of Froggie

This is the finished comic book cover for "The Adventures of Froggie," a story that originally started out as a flash animation on Youtube at the Stanimatorblue channel. The story is about a frog that seeks adventure in a strange land where anything is possible.

Posted by stanimation productions at 12:46 AM No comments: