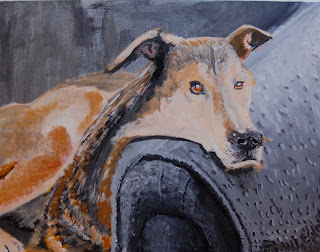 Samson was my brother's dog who recently passed. I used a photo reference I found on Facebook to paint this pet portrait. As I was painting Samson, I felt his presence around me. It was almost as if my painting somehow invoked the spirit of the dog around me. I could even smell his distinct canine smell in the room. Samson is a very loyal dog who protects the innocent with his strong canine powers.
I began this painting by mixing a cool gray color with Mars Black, Titanium White and Cerulean Blue. Since the dog has warm colors, using a cool gray for the background colors created a sense of depth in the painting. Samson's head rests over a car seat that has pattern woven in it. If I wanted to I could have spent several days carefully carving in each weave of the seat with a tiny brush, but if I did, the level of detail would compete with the dog. In a painting it's important not to make each detail crisp and clear or it will end up being boring or too busy. It's important to have resting space and a focal point in a painting. Just a dash of dark cool gray with light cool gray right next to it creates just the right effect of hinting at the weave in the seat rather than spelling out every detail. The next step was to blog in the shape of Samson with a light reddish orange color mixed with Cadmium Yellow, Quinacridone Red, and Titanium White. Then going over that with Red Oxide mixed with the white and gray to create the warm grayish browns of Samson's beautiful fur coat. When you paint it's important to have fun, and to be in the spirit of what you're painting. When I explain how I paint it may sound technical but I don't really have a definitive process for painting. I use my instincts which is something I've developed over time through years of training and experience. A painting is an inward journey. Each stroke of the brush is a choice, and with each decision a step forward is taken on that journey to wherever the painting leads. I always start with the big shapes, and gradually add in detail from general to specific. The last thing I painted to complete the painting was Samson's eyes. Eyes are the window to the soul. If you mess up the eyes, the whole painting will be off. I studied my photo reference, and thought about the shape and the color. Then I started the eyes with a reddish brown of his iris, added the pupil, and surrounded the iris with the lines that shape the eye lids. Then I added a light touch of Titanium White to create the shiny part. It's important to notice details, but it's also important not to get lost in them. When something looks good in a painting, I move on to the next area. If I focus too much on one area, it gets all over worked. I got to keep the brush moving to different areas, and after I've touched up other areas I'll stand back about nine feet and see if I need to revisit any areas. As the painting nears completion, it become more important to know exactly what I want to do before I do it. Playing around on a painting that is near completion can mess areas up that were working well. When it's hard to know what to do next, I just do the first thing that comes to mind and react. After a few hundred tubes of paint I'll figure it out, and if I don't I just got to keep painting and remember to feel the spirit of what I'm painting and enjoy the creative process.
Posted by stanimation productions at 2:59 AM