The Jenisipicellah By Stan Levine

Friday 19th March Your character doesn’t make impulse purchases, but one day at the market they felt compelled to buy… what?

Harold was a man in his late twenties.  He was very good at fixing things, and had always wanted to run his own business as an engineer.  He dreamed of making rocket ships that would fly to outer space,so ordinary people could live extraordinary lives.  They would buy their rocket ships and fly from space station to space station, and moon port to moon port all over the solar system.  Yes. Harold was full of ideas, but he didn't think like ordinary people thought.  He was labeled lots of things, but nobody could accurately diagnose what was exactly wrong with him.  Harold worked as a mechanic during the day, and as a roadie at night.  He new just about everything related to technology.  He could create video games and programs on his computer at a coffee bar, or tune his Honda Civic so tight it would jump up in the air with the slightest tap of the gas pedal.  Harold was a genius, but he had no friends.  Everything had to be a certain way, and he always had a schedule to keep.  If things didn't go the way he planned, he would get very violent and throw things at people.
It had been a week since Harold was released from the county jail for starting a fight at the DMV with one of the clerks there.  Now he was at the local pharmacy enjoying his first moments of freedom.  He had just earned $2,000 for a video game he single created and sold online.  It was a Massive Online Role Playing game called Kinork, where players choose from a list of adventurous characters and embark on an epic journey through the treacherous make believe land known as Kinork.  The players would interact with each other and encounter dangerous monsters that guard hordes of treasure.  His game was a big success, and every week subscribers all across the globe would pay for their game time on his website.  Some might thing Harold was living the dream, but to Harold he considered himself a failure, and a very lonely man with no friends and no family.  As he walked through the drug store he browsed at magazines, books, toys, candy, and gift cards.  He just wanted to find something intriguing to take his mind off the depression.  It was a hot sunny day.  Just then, Harold got the idea to lie naked on the hot sidewalk, in an attempt to burn his body to death.  He was on his way to execute his plan when he saw the Jenisipicellah.  That's what it said on the dark blue packaging.  It was a square box, with a glowing red sphere bulging out of it, encased in plastic.  Harold pick up the box, and he heard a low pitch ring tone, and there was a vibrating sensation that ran through his arms and in his head.  It was the most amazing feeling.  He read the back of the packaging to find out more about the Jenisipicellah.  It read, "The Jenisipicellah is a product guaranteed to change your life.  It's use of zero-point energy allow you for the first time in history to grant any which you want, and as many wishes as you want."  Harold was never a religious man, but now he began to wonder.  In all his life, he had never thought it would be possible to create something so advanced as this, and he beat himself over the head for not thinking of it first.  He turned the box around and around in his hands looking for the price, but there was no sticker, not even a bar code.  Harold took the Jenisipiceelah to the check out counter and asked the customer sales clerk how much it was.
"Excuse me sir, can you tell me how much this is?"
"Hmm...Let me see here...Hey, where did you find this?"
"It was right near the exit on that shelf right over there." He pointed, and he wondered what would happen next.
"Hold on a sec," The sales clerk picked up the phone and asked the store manager for help.  A moment later Mr.Norvinast, Store Manager for Rupiton Pharmacy appeared.  He was a short white man in his late fifties.  He had piercing blue eyes that peered at you from his fat head.  Somewhere from under a giant barbell mustache lips began to move.
"What's this?"
"I don't know, he said it came from that shelve over by electronic appliances, but I can't find a price sticker or a bar code on it."
"Interesting..." Mr. Norvinast turned the box over and over in his hands, looking at the packaging.
"Well sir, it appears that this item can not be sold."
"What!?" Harold exclaimed in outrage.  "That's ridiculous! If you can't tell me how much it is, then I get it for free.  That's how it's supposed to work!"
"Well," Mr. Norvinast said, "It Ain't work-in that way today buddy."
Harold reach out in a fit of rage with is hands.  He grasped onto the glowing red orb, and wished with all his will that the manager would die at that moment.
"Let go!" The manager yelled.  Harold managed to pry the box free of the store manager's hands.
"Stay away from me man!  I got the Jenisipicellah, and nobody, not even you can stop me now!"
Harold ran out of the store as the manager yelled for security.  Mr. Norvinast tried to chase after him, but clenched his chest a block later and collapsed to the ground.
"It works...." Harold thought.  "Fascinating."  He marveled at his most victorious find, until a bus hit him.  The Jenisipicellah was thrown out of its box from the impact, and it bounced down the road where it continued to roll.  It rolled down a hill and into the hands of a child. 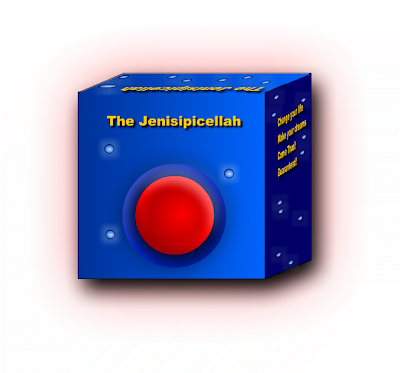 Posted by stanimation productions at 2:39 AM